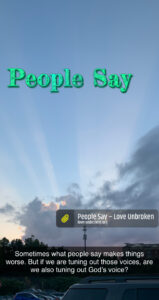 People say so many things. Things they mean, or don’t mean. Things they thought through, or something out of habit. Things that might not even make sense. When you’re battling something, that’s when what people say can really start to rile your nerves.

The amount of times I hear someone say “just do it” or “just write something” or “just don’t be anxious or depressed” I couldn’t even count. People try to explain how their situation is similar, or that they understand things that they don’t. And let’s be honest, sometimes that just pushes your buttons even more than if they had said nothing at all.

Life is hard. And I’ve been constantly battling rejection and disappointment for so long in this season that I don’t always see the light. I feel like I’ve been in a tunnel forever, and the train is going to come any minute. Every time I sit at the keyboard, I stare at the blank page with nothing encouraging to say to myself, let alone any of you. But I think that during this time, while people were saying things and I sat shaking my head, that I wasn’t open to hearing what God was saying.

The easiest thing for us to do when we’re tired of hearing the same thing over and over from people is to shut everything out. While God might be trying to use those people to speak truth into our lives, it is in the silence that God works. It is when we are at our wits end trying to force things to make sense, that we need to listen for God’s words. Because when we are so focused on shutting people out, we tend to close ourselves off to everything, and without realizing it, we’ve also cut God off too. But His voice is the one we desperately need in these seasons.

People say things, but God says the unimaginable. God told Noah to build an ark to protect his family from the flood, at a time when flooding had never occurred, and people mocked him.  God told Joshua to lead the people around the walls of Jericho for days for the walls to come down. God told Gideon that He would deliver the Midianite army to him with only 300 men.

We might roll our eyes at clichés that people say, but what God says could be the next miracle in your life, and a story to tell later about God’s provisions. You might be in a season of hurt, disappointment, discouragement, sickness, fear, or depression, but during this time, I challenge you to seek God’s voice. What He says is true.

“O Sovereign Lord, you are God! Your words are trustworthy, and you have promised these good things to your servant.” -2 Samuel 7:28

“Consequently, faith comes from hearing the message, and the message is heard through the word of Christ.” -Romans 10:17