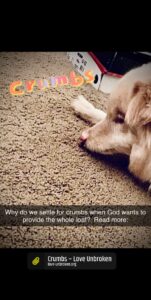 I tend to expect the worst. The habit started to protect myself from disappointment, but from all the brokenness I’ve shared, the habit grew into a tendency for me. I’m almost afraid of things working out because that means the rug could be pulled out from under me at any point. I live in fear that everything sounds too good to be true, because in the past, it has been.

I wonder how many of you struggle with this as well. You don’t think you’ll get a good job because the last offer didn’t work out. You’re afraid to commit to a relationship because of how badly the last one broke your heart. You’re afraid to start something new because you might fail. Things haven’t worked out in areas of your life, so you don’t try to make them better. You have just accepted the way things are without a glimpse of hope that it could be better.

As I was meditating on this the past two weeks, I was reminded of the girl who reached out to touch Jesus’ cloak while he was in a crowd. We don’t have access to her full story or name, but the illustration of her sneaking just to get a single touch of the ends of Jesus’ garment speaks to me. Whatever was holding her back, she didn’t think she could speak to Jesus, or touch His hands, or anything other than a single tough of his cloak on the way by. This no doubt shows her faith that she would be healed; however it also shows that willing to accept the smallest amount, like crumbs of a miracle. Compared to other miracles in the Bible, where people had conversations with Jesus or asked for healing of loved ones, or were carried down into the center of the crowd, this girl didn’t bother with any of that. Although she tried the most subtle way, Jesus felt the miracle, and turned to her. His view of her was much higher than her view of herself as He admired her faith and called her daughter in front of everyone around them.

I’ve written before about our lack of faith in provision. That we have faith God will perform miracles in other lives, but when it comes to our own stories, we don’t believe He’ll show up in the same way. We have decided to accept crumbs and stop praying for the full miracle. But over and over, God shows up. He’s healed you before. He’s provided before. He’s been there the whole time, and He won’t miss a moment. We have to work on not letting fear intercept what we know to be true. God doesn’t just want to provide you with crumbs, He wants to give you the whole loaf.

“But Jesus kept looking around to see who had done it. Then the woman, knowing what had happened to her, came and fell at his feet and, trembling with fear, told him the whole truth. He said to her, ‘Daughter, your faith has healed you. Go in peace and be freed from your suffering.” – Mark 5:32-34

“Do not be afraid, little flock, for your Father has been pleased to give you the kingdom.” – Luke 12:32