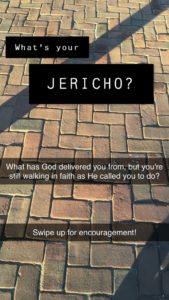 The walls of Jericho were strong, and the enemy within the gates were intimidating, but the Israelites acted on their faith. God told Joshua that Jericho was already delivered into their hands, but they had to March around the gates for seven days.

Sometimes life doesn’t have a one session solution to a situation. There’s a series of steps that gets a baseball player a home run. It’s a progress report that shows a timeline of a company’s performance. There’s a number of tests and procedures before the doctor report comes. Maybe it’s a process to forgive someone who’s hurt you, or to learn to trust someone again. Maybe it’s a journey to get your life back on track.

It wasn’t the force of their footsteps or sound of their voices that took the wall down; it was the proof of their faith in following what God told them to do that completed the mission. Despite the doubt, despite the enemies, despite the time, the Israelites pursued in faith and God completed and fulfilled His promise.

My favorite part about this story, is that God had already delivered this city. He told Joshua it was done, the same way Jesus said it was finished at the cross. Because that means we can have faith. God’s words never fail or deceive. They’re true yesterday, today, and tomorrow.

“Then the Lord said to Joshua, ‘See, I have delivered Jericho into your hands, along with its king and it’s fighting men.” -Joshua 6:2

“Being confident of this, that he who began a good work in you will carry it on to completion until the day of Christ Jesus.” -Philippians 1:6