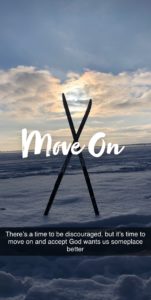 This might be a little blunt, but several of us need to move on. We’ve been discouraged for too long; we’ve been complaining for too long. We wanted something to work out, but it didn’t. We need to accept it and move on.

Personally, I spent months trying to achieve something only to have it disintegrate before my eyes. I was discouraged because I thought I was following God’s guidance. But in full reflection, I know God kept me from doing something I wouldn’t have enjoyed doing. God always wants the best for us; He doesn’t want us to settle for something less.

We might feel deserted right now. Many have lost jobs, financial security, our routine that we thrive by. But God hasn’t abandoned us. He’s going to deliver us. My challenge for you today is to stop complaining about where you are and accept that God is leading you towards something better.

“Didn’t we say to you in Egypt, ‘Leave us alone; let us serve the Egyptians’? It would have been better for us to serve the Egyptians than to die in the desert?” Moses answered the people, “Do not be afraid. Stand firm and you will see the deliverance the Lord will bring you today. The Egyptians you see today you will never see again. The Lord will fight for you; you need only to be still. Then the Lord said to Moses, “Why are you crying out to me? Tell the Israelites to move on.” -Exodus 14:12-15